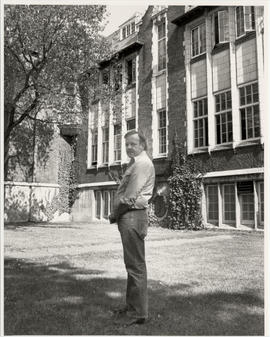 Board of Governors fonds

It mainly consists of meeting minutes (open and closed) and supporting documents of the Board of Governors and its associated committees.

Concordia University. Board of Governors

The fonds provides information primarily on the study of the crowd in history and on European revolutions.

The fonds consists of research notes, correspondence, and manuscripts. It includes microfilmed documents from other archives.

The Unity of Literature: Northrop Frye

The Centre for the Arts in Human Development

Promotional video with highlights from the I Can benefit concert.

A Short Film on Time Travel

The video, directed by John Kent Harrison, was screened at an annual Loyola Alumni Dinner to honour Dr. Marc Gervais for his fifty years in the priesthood.

This transfer contains analog and digital administrative records from the Department of Communication Studies. The following RCRP categories are contained within this records transfer:

The fonds provides information on the activities and management of the department.

These records contain administrative records of the Department of Communications Studies. The following RCRP categories are contained within this records transfer:

Presentation of the Language Lab at Concordia University.

A Gift to the Future

News report on the time capsule for the Renaud building at Loyola campus.

Report on Jazz in Montreal in the Fourties

Jerry Rubin speaks to a group of students at Loyola.

Two works by Jackie Apple performed at a VA studio.

News on Greenhouse and Solar Energy

The Unity of Literature / Northrop Frye

Northrop Fryre gives a lecture about his theory on the unity of literature.

Indian Government: 1950 to the Present

Mike Mitchell gives a description of the culture and political situation of Aboriginal peoples. Mike Mitchell, Director of North America Indian Travelling College. This lecture was part of the Loyola's Native Peoples of Canada Series.