The Conseil Quebecois de l’estampe (CQE) fonds provides information about the administration, finances, publications, and programming activities of the CQE from its founding in 1978 to 2005, when it changed its name to Arprim (Regroupement pour la promotion de l’art imprimé). In addition to documentation about the administration and programming of the CQE, the fonds also includes an extensive collection of artists’ files, providing an important record of members and their work. These files contain photographs, exhibition catalogues, newspaper clippings, brochures, slides and other documents. The fonds also contains the CQE bulletin, Bon-à-tirer, documentation concerning the publication of the Code d’éthique and yearly documentation of the Prix Albert-Dumouchel¸among other documents.

The Conseil québécois de l’estampe fonds is divided into 5 series:

Movie of the Week research and ideas

Movies of the week and television documents 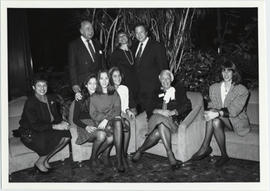 Jonathan Wener and members of his family.

The fonds consists of materials documenting the journalistic career of Jacques Trépanier and primarily concern the Montreal arts scene.

The fonds is primarily composed of press clippings from "La Patrie," organized in two scrapbooks. These scrapbooks contain a variety of clippings, including several articles documenting Montreal nightclubs during the period between 1950 and 1954. These articles were published under the headline "La Ronde des cabarets." This fonds also contains some correspondence and 45 press photographs.

Series provides documentation about the activities of the Conseil Quebecois de l’estampe (CQE) from 1978 to 2005.

Series contains meeting minutes, agendas, voting process of the members of the administrative council, summary of projects and project proposals. It also contains documentation from special meetings regarding the publication and amendments of the Code d’éthique, correspondence and activity reports.

Series provides information about the budget and expenses of the Conseil Quebecois de l’estampe (CQE) from 1980 to 2006.

Series consists of financial statements from 1980 to 1999, grant applications to the Ministry of Cultural Affairs and financial assistance requests to other sources. It also contains correspondence, budget and expenses reports for events and publication projects as well as invoices and contributions, providing a record of members’ registration to the CQE.

Series provides an extensive collection of artists’ files, providing an important record of the Conseil Quebecois de l’estampe (CQE) members and their work.

Series documents the exhibitions and events organized by the Conseil Quebecois de l’estampe (CQE) in Canada as well as exhibitions abroad in collaboration to other institutions.

Series contains yearly documentation of the Prix Albert-Dumouchel, correspondence, grant request from the CQE to the Ministry of Cultural Affairs, photographs, printed promotional material for events, communiqués, press releases and newspaper clippings, exhibition catalogues, list of artworks and prices, list of exhibitors, exhibition contracts between the CQE and galleries and other documents.

Series includes the CQE bulletin, Bon-à-tirer, from 1987 to 2005. It contains documentation about the publication of exhibition catalogues, the Livre d’art and the Code d’éthique’s French, English and Spanish versions, including drafts, revisions with handwritten notes, press releases, meeting minutes and correspondence.

The Norman Marshall Villeneuve fonds documents Norman Marshall Villeneuve’s career as a jazz musician. It also contains records relating to other Canadian as well as American jazz musicians. Materials in this fonds are dated between 1946 and 2016, with the majority of the documents dating from 1960s to the1980s. Most of the material was created in Toronto, Ontario, and Montreal, Quebec.

Series consists of works created by René Balcer. Material consists of drafts for a novel and short stories, a novel treatment for The Mother-in-Law Manual, which also includes research of the treatment, and other assorted writings including a poem “I Like Running Out of Time” by Balcer.

Series consists of research associated with the series Law & Order: Los Angeles (LOLA). Material consists of news articles from newspapers and online news sources that were explored and consulted for story ideas for the series.

Series includes records relating to the television series Hopewell. Material consists of drafts and final scripts, beat sheets, research, photographs of production stills used for the opening sequence, set design drawings for set construction and layout, photographs of set items with annotations about the colour, design and layout of a particular set, samples of flooring, paint colours, and shades used in the production, location agreements, a list of directors, cast and crew lists, schedules, production budgets, contacts, and contracts.

The series contains documentation pertaining to the history of jazz in Canada in the second half of the 20th century. It documents Vernon Isaac’s career as a jazz musician through recordings of the LVJ Trio, Vernon Isaac’s Big Band, Jazz Ottawa and an interview with Vernon Isaac. It also includes recordings of Allan Wellman and Oliver Jones.

The series illustrates Vernon Isaac’s personal life as well as his career as a musician, and includes documents concerning his work with Three Jacks and a Jill, the Vernon Isaac trio, Jazz Ottawa, Ebony in Rhythm, and others. The photographs mostly relate to Vernon Isaac's work as a musician, but also includes images of him as a soldier, and of his family and friends. Some images depict his travels to Greenland and Alert, Nunavut. The series also includes publicity photographs showcasing other artists (some publicity photographs are inscribed by the artists).

The series provides information on Vernon Isaac and other jazz musicians. it presents Isaac’s life as a musician as well as his family. It also contains material on Jazz Ottawa.

The materials in the fonds document Vernon Isaac’s life as a jazz musician and the Canadian jazz scene of the 1970s to 1990s. The fonds also contains information about Vernon Isaac’s family.

Series contains expenses and finances relating to René Balcer. Material consists of travel expenses for René Balcer and his wife Carolyn, invoices and receipts from various projects, and meetings with clients.