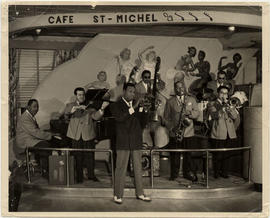 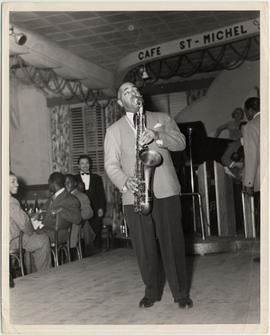 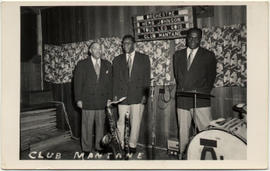 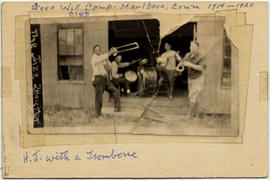 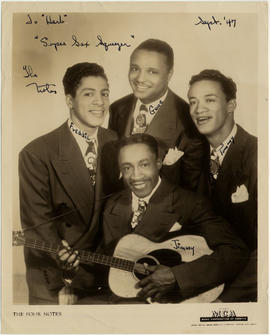 Herbert William (Herbie, Herb) Johnson was born November 3, 1902 in Hartford, Connecticut. His mother, Parmelia (1888-1962), was a Québécoise from St. Hyacinthe, and his father, Thomas Matthew Johnson, was an Afro-American. Thomas Johnson worked as a landscape gardener, and sang bass in a quartet and played drums in an 8-piece orchestra that rehearsed in the Johnson home.

Herb Johnson played in bands as a child, and became a professional musician in his teens. At that time his main interest was drumming. He began his professional career in dance bands in Hartford during the 1920s. At this time he began to play the baritone saxophone, then switched to tenor saxophone, which would be his main instrument, although he also played clarinet. He moved to New York in 1928 and worked in bands led by such musicians as Jelly Roll Morton, Benny Carter, Noble Sissle, and Kaiser Marshall.

As the Depression and Prohibition affected employment for musicians in New York City, he went on the road and performed in Albany and other cities in New York State. In 1935 he was recruited by Jimmy Jones to play in his Harlem Dukes of Rhythm Orchestra in Montreal. Herb Johnson took up residence in Montreal and stayed in the area for the rest of his life. He played with various bands and led bands that played in Café St. Michel, Rockhead's Paradise, Roseland, and Chinese Paradise Grill, among others. He toured in Quebec, Ontario, and New York.

From 1946 to 1949 he played tenor saxophone with the Louis (or Louie) Metcalf International Band at the Café St. Michel. The Louis Metcalf International Band introduced the then-revolutionary emerging bebop style of music to the Montreal nightclub scene in 1946. Herb Johnson brought valuable arranging skills to the Metcalf band, and between 1946 and 1949 he arranged many of the band's songs in the complex bebop style.

In 1950 Herb Johnson recorded Wilk's Bop with Wilkie Wilkinson and His Boptet. It was the first bebop recording in Canada.

In the 1940s he wrote a regular column on the Montreal music scene for The Music Dial, a Black-owned and operated monthly magazine published in New York which covered music, theatre, and the arts.

A musicians' union member since 1922, in Montreal in the late 1930s Herb Johnson was vice-president of the Canadian Coloured Clef Club, the local association of Black musicians. It was absorbed in the period 1939-1943 by the Musicians' Guild of Montreal, which was Local 406 [Montreal] of the American Federation of Musicians; Herb Johnson was apparently the Guild's first black member. He worked with the Guild's Brotherhood Committee, which provided assistance for musicians with medical and other problems, and he worked with the union's Election Committee.

The fonds consists of materials assembled by Herb Johnson. It reflects his career as a musical performer, combo and dance band/orchestra leader, and musicians' union member and executive, as well as his personal interests and personal life.

The fonds documents the dance band and jazz music scene from the 1930s through the 1980s, primarily in Montreal. It is a valuable source of documentation on the bebop style of jazz that emerged in the 1940s, and of documentation related to the Senior Musicians' Association and Orchestra.

The fonds consists of manuscript and print music, including arrangements by Herb Johnson; personal correspondence; saxophone and clarinet technique books and articles; books and articles on arranging, harmonizing, and other facets of music; photographs; notebooks; personal financial records; programs, clippings, and other memorabilia; and magazines. The fonds includes sound recordings as well as objects including music portfolios, pocket handkerchiefs, and a record carrying case. There are also union-related correspondence, financial documents, contracts and other documents related to musicians' pay and benefits, founding documents, constitutions and by-laws, questionnaires, ballot papers, agendas, minutes, and address books.

The fonds is arranged in the following series and sub-series:

The documents were donated to the Concordia University Archives by Herb Johnson's son Coleman Johnson in 1993.

Some sound recordings have been transferred to DAT cassettes.