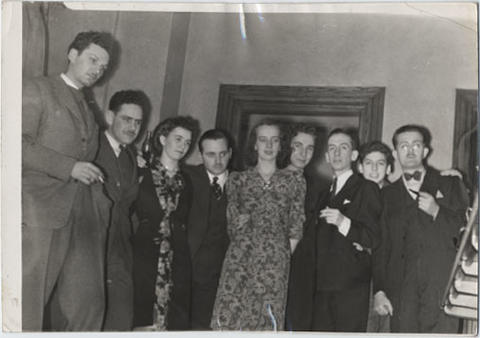 "The Brains Trust" or, as it was formally known, "The Georgiantics Production Board". From left to right: Merv Gelfand, musical conductor and contributing composer in 1941 and 1942, musical arranger in 1942, and trumpet soloist. Dave Campell, writer, advisor, actor, and comic. Mrs. Henthorn. Dick Henthorn, writer, skit director, and actor in 1942 show. Jean Somerville, chorus girl in 1941 and 1942 and choreographer in 1942.
Fred Kerner, composer, lyricist, actor, and jack-of-all-trades for three years, director of the '42 show and planned its troop-entertainment operations after the show had its run for the student body. William (Bill) Hamilton who got involved with the business side of the 1941 show and willing undertook to become producer of the '42 production and its onerous post-production schedule. Harold Ship, key player backstage for the 1940-42 shows, leading the crew for the latter two productions. Herb Quinn, starred in the '39 show and went on to play key roles in the next three productions.