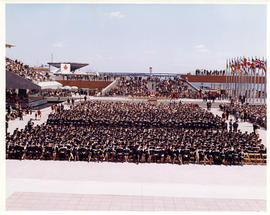 Professor Donald Leonard Peets joined Sir George Williams College in 1946 as a teacher in biology. He was appointed Assistant Dean in 1956 and then Registrar on July 1, 1962, a position he held until 1969. He continued his teaching in biology during his administrative mandates. He retired in 1980.

Professor Peets, was born in Saratoga Springs, N. Y. on May 21, 1915 and died in Montreal on June 6, 1988. He graduated from McGill University in 1940 (BSc.). During World War II, he served in the South Pacific with the United States Army. Professor Peets was especially interested in the field of human genetics which he taught at Sir George and then at Concordia University. He was married to Marion Best.

The fonds is composed of a text book, a few photographs and newspaper clippings related to Professor Peets’s career as Registrar in the 1960s.

Most of the documents were donated by Mrs. Marion G. Best Peets in 1997; the text book by the Department of Biology in 1996.