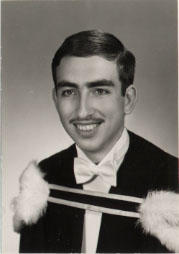 Convocation 1971. Richard Z. Lemanczyk, recipient of the Loyola Science medal, awarded to the student with the highest overall average in Science. He also won the Chemcell Prize for chemistry (highest four-year average in Chemistry subjects) and the Society of Chemical Industry, Canadian section, Merit award, Chemistry (for the highest ranking (over 75%) student in the fourth year, majoring in Chemistry, Chemistry-Physics, or Chemistry-Mathematics, who has completed the course in the normal number of years). He received the medal at the Spring Convocation on May 29, 1971.