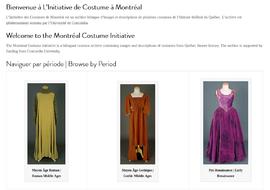 Ana Cappelluto is an associate professor in the Department of Theatre at Concordia University where she teaches Design for the Theatre. She is also the Faculty of Fine Arts' Associate Dean, Planning and Academic Facilities. Ana Cappelluto first came to Concordia Fine Arts as a young student in Design for the Theatre in 1984. Born in Rome, Italy she lived in England for many years before settling in Montreal. After completing her degree, a BFA in scenography (1987), she was hired as assistant to the props master at the Department of Theatre in 1988. In 1993 she earned her Master’s from McGill University. In the fall of that year, Ana began teaching in the theatre department where she served as Chair from 2004 to 2007. Before serving in her current position as Associate Dean, Planning and Academic Facilities, she held the position of Associate Dean, Research and Graduate Studies.

In 2000, she completed a two-year project on the works of major Quebec costume designers that dominated the Quebec theatre landscape since the mid-1960s. The project involved researching, documenting and photographing works of costume designers from over 800 the theatrical costumes at the Montreal-based Centre national de recherche et de diffusion du costume (CNC). Established in 1994, CNC was a non-profit organization and housed one of the largest and most important private collection of theatre costumes and accessories in Canada. At the core of the CNC collection was the inherited inventory of l’Atelier de Costume B.J.L. founded in 1972 by the designers François Barbeau, Louise Jobin and François Laplante. In 1996, CNC acquired the whole costume collection of the Théâtre Populaire du Québec.

Because of the lack of financial resources, the CNC was closed and the costume collection was dismantled in 2005. A website in French, entitled “Centre national du costume – recherche et diffusion: La Collection de costumes de théâtre” was created by Ana’s research team in 2000 with the CNC collaboration. The website was part of the Canada’s Digital Collections (CDC) operated by Industry Canada. In 2004, the Industry Canada CDC Program was stopped and later on, all the websites of the program were deactivated. At the end of 2015, the web site was reactivated on Wordpress, under a new name: “Archive de costume de Montréal / Montréal Costumes Archive”. At the same time, some costume descriptions were revamped and English translations were added.

The fonds provides information on Ana Cappelluto’s project with the CNC on Quebec theatre costume designers, mainly between 1997 and 2000.
The fonds mainly consists of a web site entitled “Archive de costume de Montréal / Montréal Costumes Archive”. There are also a few administrative records and some reference materials on the history of costumes.

The documents were donated to Records Management and Archives by Ana Cappelluto in 2019.